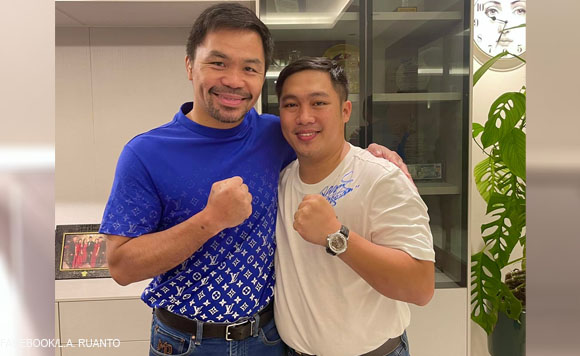 In a Facebook post, Ruanto shared that he met Pacquiao for the third time recently, and it was his most intimate and memorable meeting with him.

He said he was able to introduce Pacquiao to his friend US strategist Steve Schale.

He also informed Pacquiao that he never forgets to include the boxer’s life story when he talks about self development, faith, leadership and excellence.

And what’s more, he was able to get Pacquiao to autograph his pink gloves.

It was a memorable encounter!

This is the 3rd time I met the Legendary and Future Hall of Famer Boxing’s only 8 Division Champion and kind hearted public servant Former Senator Manny Pacquiao, definitely this is the most intimate and memorable meeting i had with him. Got to introduce my friend and mentor, US Strategist Steven Schale. Thank you my kumpadre and forever brother Ronwald Munsayac.

I told Senator Manny that i always include his lifestory whenever I was invited to talk about self development, faith, leadership and excellence in over a thousand times. He got my Pink Gloves Signed with his autograph,” Ruanto posted.