Nine missing after ferry catches fire in the Philippines 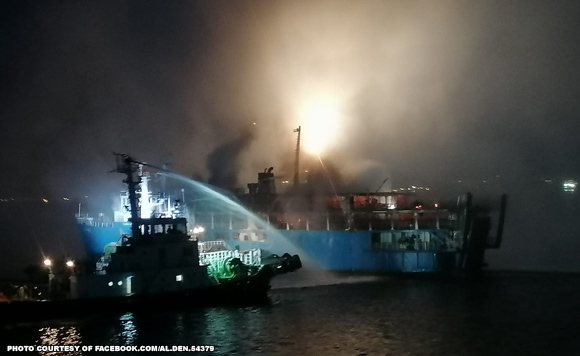 A ferry caught fire off a port near the Philippine capital Manila on Friday, leaving nine people missing and one injured, the coast guard said.

Emergency services rescued 73 of the 82 people who had been on board the MV Asia Philippines as it burned near the port of Batangas, a coast guard statement said.

They included a middle-aged woman who was taken to hospital with an unspecified injury, the statement said, adding nine other people were still missing.

Two coast guard search and rescue vessels were still looking for the missing and trying to put out the blaze as of early evening, hours after the ferry caught fire about one nautical mile (1.85 kilometres) from shore.

The cause of the fire was not immediately known.

The ship had sailed from the port of Calapan on nearby Mindoro island in mid-afternoon with 48 passengers, 34 crew members and 16 motor vehicles on board, the coast guard said.

The vessel is authorised to carry 402 passengers, it added.

The Philippines, an archipelago of more than 7,000 islands, is plagued by poor sea transport, with its badly regulated boats prone to overcrowding and accidents.

At least one person was killed after a fire engulfed a Philippine ferry off the central island of Bohol in June.

In May, seven people were killed when a fire ripped through a ferry carrying 134 passengers and crew off the port of Real, east of Manila. (AFP)