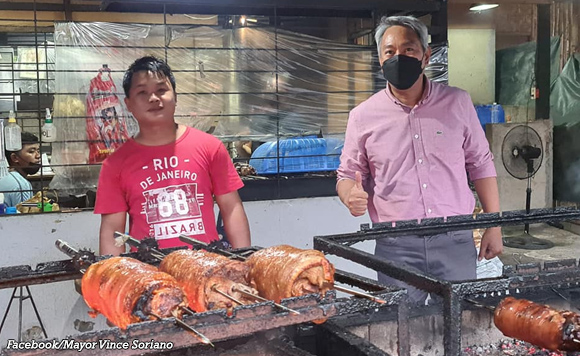 Pakil Mayor Vince Soriano was in Dumaguete recently for an important event, but he chose to skip the dinner afterward that was held in a hotel.

Instead, Soriano went out to look for delicious lechon.

In a Facebook post, Soriano said he asked locals where to find the best lechon, and he was directed to 3 Little Pigs Boneless Lechon.

He was not disappointed.

The place was small, but its original and spicy lechon were very tasty, he said.

Even if the place did not have his favorite Mang Tomas, its own dipping sauce that consisted of soy sauce with calamansi and sili made him eat a lot, he said.

It was a good thing he had his maintenance medicines with him, he added.

Soriano said he now has a new favorite place in Dumaguete that offers delicious food but won’t break the bank.

He said he was certain that there are many more small eateries in Negros Oriental that would fit people’s tastes and budgets, and he was sure he would get to visit these soon.

Til the next food trip!

Politiko would love to hear your views on this...
Post Views: 10
Tags: lechon, Mayor Vince Soriano