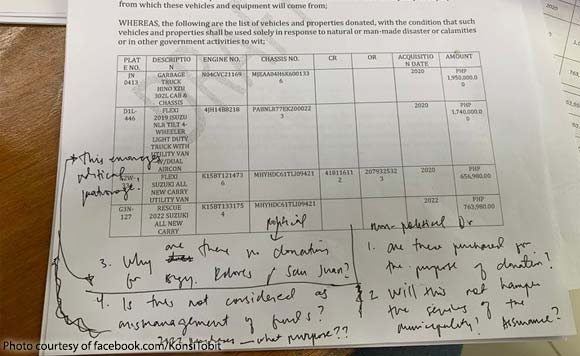 Incoming Taytay Councilor Tobit Cruz voted against accepting the Taytay local government’s donation of vehicles, tents, chairs, and speakers to the barangay where he currently sits as an official.

Cruz said the donation raises several questions for him.

One is whether the local government really bought the vehicles for donation to the barangays, as he noted that 23 out of the 34 vehicles being donated were bought this year.

He also said it was questionable that the barangays not affiliated with the incumbent were not included in the donation.

And even though the municipal government said the donation of vehicles would not affect its operations, this did not seem to be the case, he said.

The workers at the offices to which the vehicles were previously assigned say otherwise, he said.

Cruz said the municipal government’s move to donate the items promoted patronage politics and political retaliation that would adversely affect the people and public service.

It was not easy for him to reject the donation since the barangay could really use the items, but it had to be done, he said.