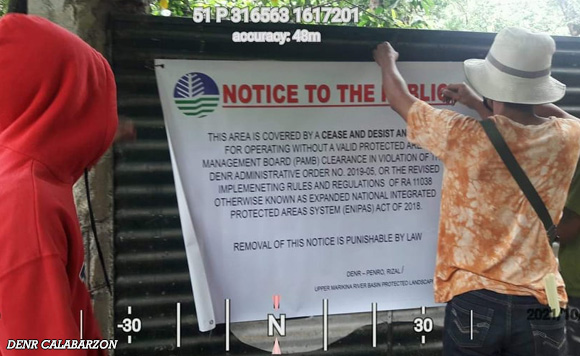 The Department of Environment and Natural Resources in Calabarzon has given assurance that it is taking action on violations of environmental laws and on other issues concerning the Masungi Georeserve area.

The DENR- Calabarzon said it continues to undertake efforts to protect and conserve the Upper Marikina River Basin Protected Landscape, where Masungi is located, while also upholding the rule of law.

“The regional department guarantees that it is working tirelessly to attain environmental justice that is swift, certain, and fair,” it said in a statement on Facebook.

It made the statement after the Office of the President issued an order to launch an investigation into illegal activities in the protected area and to file charges against those who broke environmental laws.

DENR-Calabarzon said the order was premised on “baseless accusations” of people from the Masungi Georeserve Foundation, Inc. who had alleged that the department was not proactive in dealing with violations.

It said it had actually gone after those who violated environmental laws in the protected area.

It obtained guilty verdicts for environmental crimes and conducted joint operations and apprehension activities, it said.

It also issued show cause orders and cease and desist orders to those who put up illegal infrastructures with the protected area, such as piggeries, resorts, camp/retreat centers, and houses.