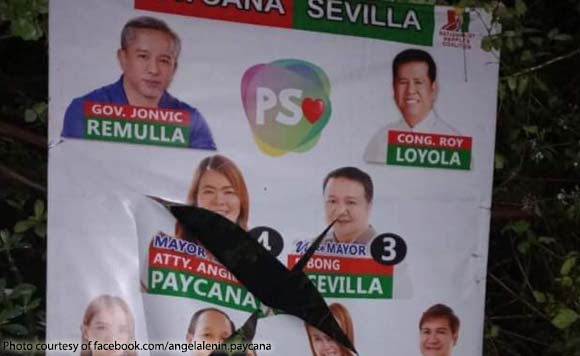 General Mariano Alvarez Vice Mayor Angie Paycana is saddened over the vandalism of her campaign posters, which has been happening frequently.

Paycana shared a photo of the defaced campaign material on Facebook and said this has been happening even if the poster was placed on private property.

She would have wanted to keep silent about this, but it is already too much, she said.

She issued a reminder that the elections would be decided by the people, not by tarpaulins.

She also said her rivals have been spreading hate about her in a Facebook page, but she has chosen to answer allegations in the proper venues, which are the caucuses and sorties.

She wants to do the right thing, but she could not help but be saddened by other camps’ tactics, she said.