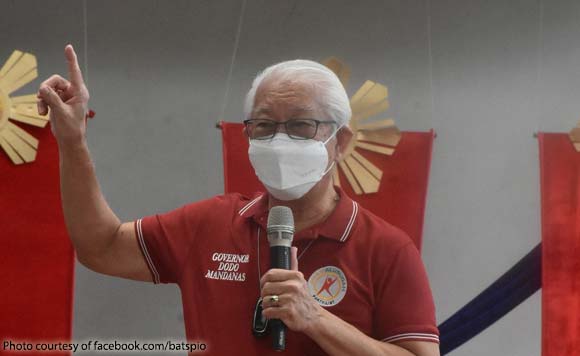 Batangas Gov. Dodo Mandanas will not go up against kakampinks.

Mandanas has rescheduled a meeting of the provincial government with city and barangay officials and volunteers of Sto. Tomas to avoid clashing with the campaign rally of presidential bet and Vice President Leni Robredo.

The Batangas information office said on Facebook that Mandanas only learned on the afternoon of March 17 that Robredo was supposed to campaign in Sto. Tomas on March 21.

The meeting with the Sto. Tomas personnel had also been scheduled on that day, it said.

It said Mandanas immediately ordered the postponement of the provincial government’s meeting in Sto. Tomas and reset it to March 24.

Mandanas is a supporter of survey frontrunner Ferdinand “Bongbong” Marcos Jr., who lost in the province in the 2016 vice presidential race.

But the governor believes Batangas will come out for Marcos in the May elections.