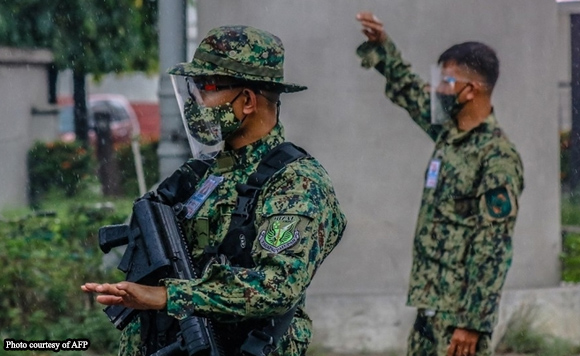 A child was killed and six others wounded after a bomb exploded on a public bus in the insurgency-plagued southern Philippines on Tuesday, authorities said, but no group has claimed responsibility.

Police said the explosion happened as the bus was travelling along a highway near Cotabato City on Mindanao island, a haven for multiple armed groups ranging from communist insurgents to Islamist militants.

The bomb was “inside the bus, at the end part… where there were a lot of people sitting,” said Chief Master Sergeant Randy Hampac, police spokesman in Aleosan town.

A five-year-old boy died, while six others were wounded in the blast that shattered the back windows, Hampac said.

The wounded included a five-month-old baby and a three-year-old child.

A police report said one of the victims saw a male passenger leave “baggage” on the bus when he disembarked and it later exploded.

“It was the first time for this to happen in our town,” Hampac said.

“There were incidents of bombing of cell towers in previous years but this incident of an explosion in a bus, it’s the first time.”

Militant attacks on buses, Catholic churches and public markets have been a feature of decades-long unrest in the region.

But smaller bands of Muslim fighters opposed to the peace deal remain, including militants professing allegiance to the Islamic State group. Communist rebels also operate in the region.

In May 2017, hundreds of pro-IS foreign and local gunmen seized Marawi, the country’s largest Muslim city.

The Philippine military wrested back the ruined city after a five-month battle that claimed more than a thousand lives.

Politiko would love to hear your views on this...
Post Views: 10
Tags: claimed, Philippines, public bus