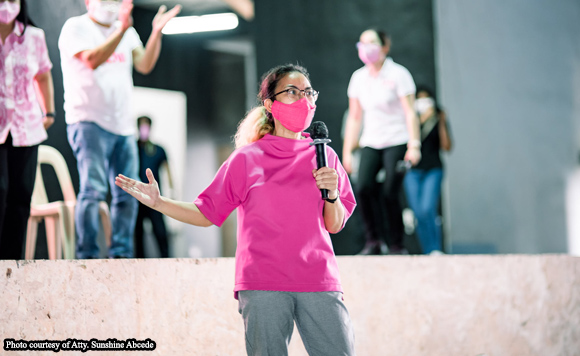 Lucena Councilor and mayoralty candidate Sunshine Abcede lamented that traditional politics is rearing its head in the city.

This was after she accused Mayor Dondon Alcala of giving orders to evict her from a local government sponsored event.

Abcede delivered a privilege speech where she said that as chair or the social welfare committee, she attended the distribution of allowance of barangay health workers and day care workers held at the new evacuation center.

She said that as a working councilor, she wanted to thank them for their hard work and sacrifice for the people of Lucena during the pandemic.

But during the event, staff members from the Special Project Unit told her that Alcala was angry that she was at the event, and pleaded with her to leave lest they lose their job.

They surrounded her and escorted her out, which is a violation of her rights, she said.

She asked why she was not allowed at the event when it was held using public funds.

Abcede said she may have been wrong to expect that there would be a level playing field for all candidates in Lucena, but it should not be the case that workers are punished for being seen with the incumbent’s rivals.

She is not asking for special treatment, all she wants is a fair fight, she said.

Politiko would love to hear your views on this...
Post Views: 26
Tags: Lucena Councilor, Sunshine Abcede