DENR closes down piggery after residents complain of foul smell 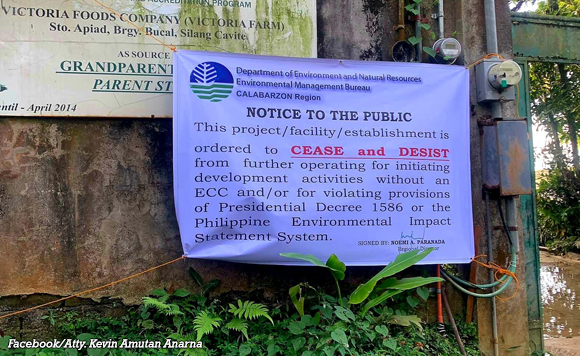 The Department of Environment and Natural Resources has issued a cease and desist order against the operations of the Victoria Farm in Cavite after residents complained of its foul smell, according to Cavite Board Member Kevin Anarna.

Anarna said on Facebook that for more than a decade, residents of Barangay Bucal have complained of the smell from the farm which is also a piggery.

He also alleged that it was allowed to operate even if it did not have the proper permits.

He said the years-long problem was finally addressed when his political team, the Team Anarna Carranza, acted on it.

He also thanked the DENR for taking action on the matter.

Leaders must show political will and must not give special treatment to anybody, he said.

Politiko would love to hear your views on this...
Post Views: 19
Tags: Cavite, Cavite Board Member Kevin Anarna, Department of Environment and Natural Resources, piggery