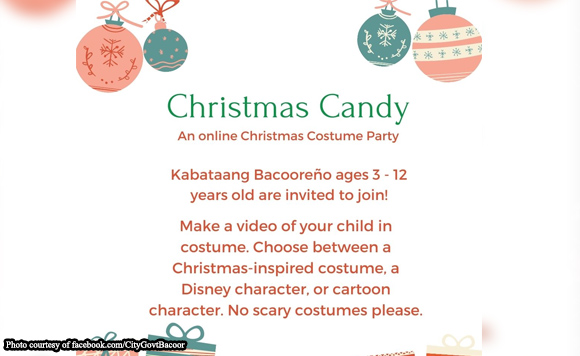 Kids in Bacoor could have a fun time dressing up and win prizes this Christmas.

The city government of Bacoor is hosting a an online Christmas costume party for children aged three to 12 years old, it announced on Facebook.

Parents who want their children to join the event should make a video of their kids in their costumes, it said.

The costumes could be Christmas-inspired or could be of Disney and Christmas characters.

“No scary costumes please,” it added.

The winners will be announced on Facebook Live of the the City Government of Bacoor’s Flag Raising Ceremony on December 20.

A total of seven winners will also get P2,000 each, while top 20 winners will receive special Christmas goodies.

Those who want to join should send a1 5-second video to CandyChristmas2021@gmail.com on or before midnight of December 19.

The video format should be MP4 and should include a medium and wide shot of the child.