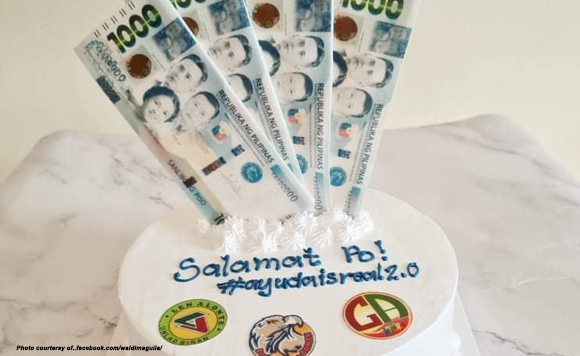 The Biñan government has been distributing cash aid to its residents, but Mayor Arman Dimaguila also got some sweet ayuda of his own.

But his was not in cash, and was instead was made of sugar.

In a Facebook post, Dimaguila shared a photo of the cake that he received from The Cake Rack Bakeshop.

The mayor joked that the P4,000 ayuda was returned to him.

Even though it was not real cash, a lot of people enjoyed the cake.

It was devoured in the radio station and did not make it to his home, he said.

This was a satisfying ayuda!


Politiko would love to hear your views on this...
Post Views: 5
Tags: ayuda, Biñan mayor Arman Dimaguila, government has been distributing cash aid