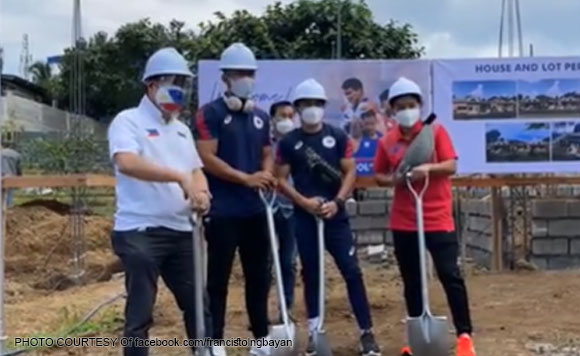 TAGAYTAY CITY – The city government of Tagaytay has renamed a portion of a street in honor of Filipino Olympic winners in the recently concluded Tokyo Olympics.

The announcement was made by Sen. Francis Tolentino during Wednesday’s ground breaking ceremony for the houses and lots that were awarded to olympic boxing medalists Nesthy Petecio, Carlo Paalam, and Eumir Marcial.

According to Tolentino, a portion of the current SVD Road along Barangay San Jose where the prime lots of the country’s winning amateur fighters are located will be now known as the “Olympic Lane.”

The Tolentino brothers who were both former local chief executive of the city and incumbent Tagaytay City Mayor Dr. Agnes Tolentino, DMD led the ground breaking and formal transfer of the prime lots to the boxers.

The construction of the boxers’ respective houses in Barangay San Jose are expected to be finished by November this year, according to the Senator.

Originally, it was only Olympic gold medalist Hidilyn Diaz that was supposed to be rewarded with a house and lot, but the POC chief changed his mind following the heroic performances by the three fighters in the squared circle.

Diaz during Wednesday’s event also finally got her fully-furnished house and lot gift from the POC chief inside an exclusive subdivision, which is located along Barangay Kaybagal Central.

Meanwhile, all the Tokyo Olympic winners during the Tagaytay event were also given brand new vehicles courtesy of a Chinese automobile company. (JCC)