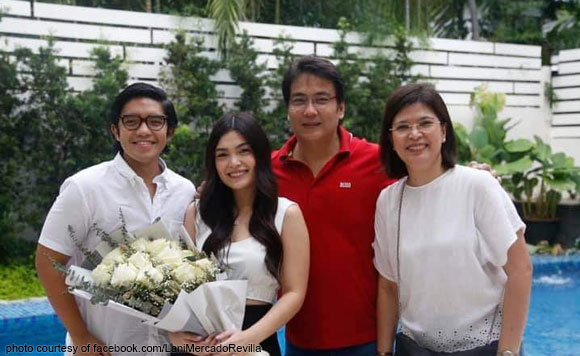 Bacoor Mayor Lani Mercado’s daughter Gianna just turned 26, and aside from greeting her on her birthday, the doting mom shared the meaning behind her full name.

Mercado said a lot of people have asked why they named her Maria Viktoria Gianna.

Mercado offered an explanation on Facebook as she greeted her daughter on her last birthday as a single lady.

She said Maria was taken from Mama Mary since Gianna was born on August 15, the feast of Mary’s assumption into heaven.

Her other names Viktoria Gianna were given to her because Mercado was pregnant with her when her husband Bong Revilla was running for Vice Governor in the 1995 elections.

Though Gianna is set to get married soon, Mercado said she would always be a little girl to her parents and the family’s performer and artist.

She is their prayer warrior and praise and worship singer who inspires the family.

She prays that Gianna continues to touch other people’s lives.

She chose a fitting name for her daughter!

“To our birthday girl Gianna, today is your 26th birthday (last birthday that you are single). A lot of people ask why did we name you Maria Viktoria Gianna. Since you were born Aug 15 we named you after Mama Mary’s Assumption into heaven. Viktoria Gianna because I had you in my tummy when Papa was running for Vice Governor during 1995 elections with then Gov. Epimaco Velasco and he won as VG.

You will always be our joyful little girl, our performer and artist in the family. Our prayer warrior, our praise and worship singer who would just inspire us and lift us up in the lowest parts of our life. Papa and I love you anak. We pray that you would continue to touch other people’s lives with your love and presence. Lots of hugs and kisses…