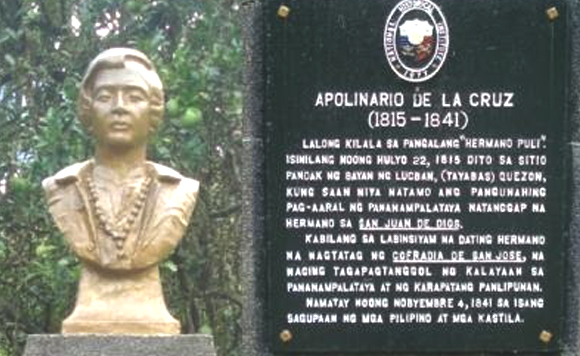 The House of Representatives has approved on second reading a measure declaring November 4 of every year a special non-working holiday in Quezon in commemoration of the life and service of revolutionary hero Hermano Puli.

Quezon Rep. Mark Enverga, author of House Bill 9009 said the Hermano Puli or Apolinario dela Cruz is one of the heroes who fought for religious freedom during the Spanish era.

“Hermano Puli rendered invaluable service in our country by founding the brotherhood popularly known as Confradia De Jesus,” said Enverga in his bill.

“Hermano Puli stands out among the heroes of the Filipino people. He said the power of religion on the life of his countrymen. He knew that colonial rule could not be overthrown by force or use of arms,” added Enverga.

Enverga said Puli’s studies in the library of the Hospital de San Juan de Dios convinced him that religion was a powerful means to awaken his people and liberate them from the abusive colonial government.

Politiko would love to hear your views on this...
Post Views: 14
Tags: Hermano Puli Day, House of Representatives