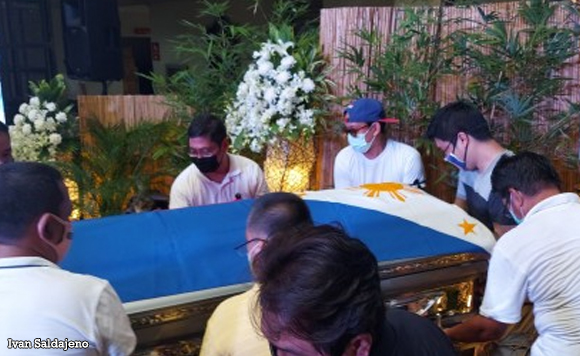 MANILA – Politics is among the angles being looked into by the police over the killing of Los Baños, Laguna Mayor Caesar Perez, a police official said on Tuesday.

“That (politics) is one of the possible motives but we have yet to check that,” said Brig. Gen. Felipe Natividad, director of the Police Regional Office (PRO) 4-A (Calabarzon), in Filipino in a press briefing in Camp Crame.

He said CCTV footages were of no help as none captured the movement of the suspects.

Natividad added that they are in constant coordination with Perez’s family and staff to find his cellphone which may contain vital information.

This came as they received information that Perez has been getting death threats after he was included on President Rodrigo Duterte’s ‘narco-list’.

Natividad said police are still determining the weapon used in the incident, noting that the suspect seemed proficient and trained.

“Given that it happened at nighttime, we can say with the distance of 26 meters, the gunman has good marksmanship. It seems the suspect is trained and is probably a gun-for-hire. The (bullet) fragments were actually recovered from the body of the mayor. We can say that it is a special kind of bullet but we have yet to determine its caliber,” he added.

Natividad, however, said they have yet to determine whether the act was perpetrated by a sniper.

“We cannot yet conclude if it is a work of a sniper considering the distance and the lighting condition in the area. In terms of distance, 26 meters is a bit near,” he added.

He added that there are three witnesses to the incident but were not able to identify the suspects.

Perez was gunned down by unidentified suspects inside the Municipal Hall in Barangay Timugan on Dec. 3. His remains would be laid to rest on Saturday.
He succumbed to gunshot wounds in the head, trunk, and right shoulder.

He was earlier included in the government narco-list, but he had repeatedly denied the accusation.

In 2017, Perez’s younger brother, Ruel, was gunned down by two motorcycle-riding suspects. (PNA)