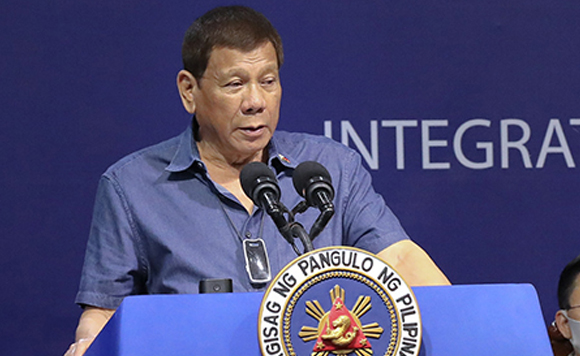 President Rodrigo Duterte has distanced himself away from the murder of Los Baños, Laguna Mayor Caesar Perez and killings of alleged narco-politikos carried out by the police.

“Mind you, ‘yung lahat na namatay, natirik, well, you will just have to look for the killers. Hindi dito sa opisina ko ‘yan. It’s not mine,” said Duterte in a briefing Monday night.

Duterte issued the statement after Vice President Leni Robredo said the killing of Perez, the latest in a series of assassinations of narco-politikos named by Duterte, showed that these murders have become “normalized.”

Duterte also addressed the appeal of the mayor’s son, Aldus, who sought justice for his father who was shot inside the municipal hall last December 3, three years after the mayor’s brother, Ruel, was also killed by two men.

“Iyong cursory reading lang pero wala akong minemorize na mga tao doon sa listahan. I’m sorry if your father was there (narco-list). But really, most of those, nasa droga talaga. Your father might be an exception. And if you believe firmly that he was not guilty or liable of anything, well, it’s good. But the problem his name umabot doon sa listahan,” said Duterte.

Duterte justified the release of the narcolist even if it led to the killings of some of the suspects on the list.

“As a matter of an obligation, I had to come up with the name of those suspected so that the public will be aware and prevent their ascension to public office. Iyon ang purpose ko thereon. At marami sa mga barangay captain, almost more than 400 of them mga barangay captain, mga city mayors kasali doon,” he said.