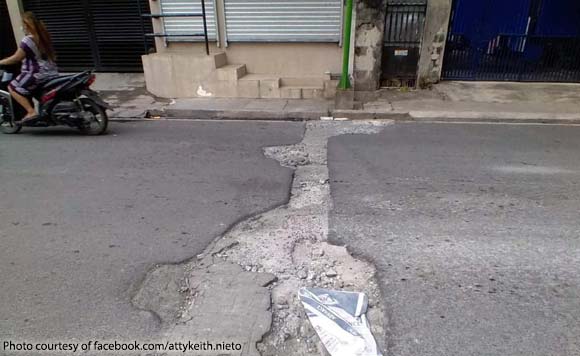 It looks like Cainta Mayor Kit Nieto has had it with sloppy patch up jobs after road diggings.

Nieto has ordered his staff to identify the contractors behind the poor repair of roads that had been torn up for utility works.

In a Facebook post, Nieto shared a photo of a road digging that was poorly covered up after pipes were installed.

He lamented that the government was expected to be responsible for fixing the road even though it was a private company that tore it up.

He had the potholes repaired, but he does not want to let erring contractors get away with their poor work.

He ordered the filing of appropriate cases in court and said all installations and requests for excavations would be on hold until the issues are resolved.

Cainta won’t take the destruction of its roads sitting down!

Sampolan natin. Nanette Villafuerte identify the contractor and file appropriate cases in court. Hold ALL mwc installations and requests for excavation until they cover all the issues we raise,” Nieto posted.

Politiko would love to hear your views on this...
Post Views: 32
Spread the Love
Tags: Cainta, Mayor Kit Nieto