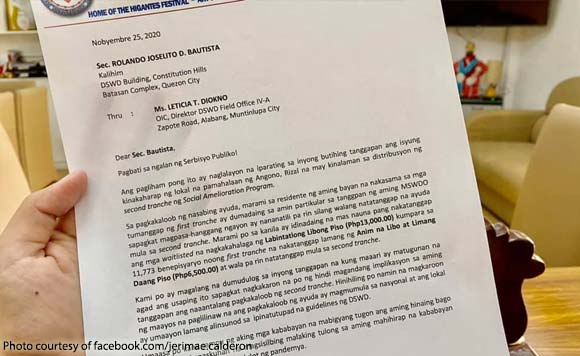 Angono deserve an explanation from the Department of Social Welfare and Development, according to Mayor Jeri Mae Calderon.

In a Facebook post, Calderon made public her letter to the DSWD asking about the delays in the distribution of the second tranche of cash assistance under the Social Amelioration Program of the government.

In her letter, she said her constituents are complaining that those waitlisted for the cash assistance were able to receive P13,000, but those on the list of beneficiaries are still waiting for the second tranche.

She called on the DSWD to respond and to provide an explanation for what happened as it has a bad implication on her office.

In her post, she noted that the typhoons have come and gone, but the cash assistance has yet to arrive.

She hopes this would be resolved before Christmas, she added.

Let’s hope she won’t be ghosted!