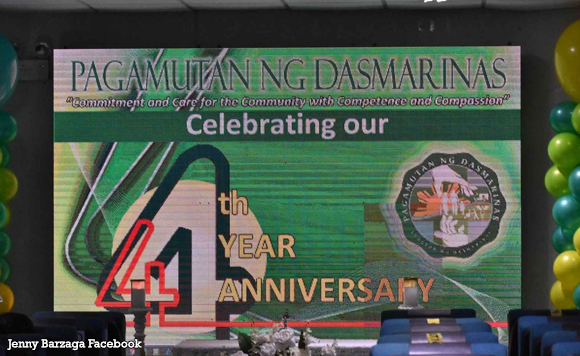 For the fourth anniversary of the Dasmarinas hospital, Mayor Jenny Barzaga decided to pay tribute to one of its heroic doctors.

Barzaga named the Operating Room Complex after Dr. Ronaldo Mateo, who died of COVID 19 in the line of duty.

The event was marked by a virtual mass, an online health and mental wellness, and the unveiling of the Operating Room Complex named after Mateo.

The hospital will continue to provide excellent care to its patients and he frontliners amid the pandemic, she said.

Here’s to more years of service!

The locally funded Tertiary hospital-Pagamutan ng Dasmariñas-celebrated its 4th year founding anniversary following all the necessary minimum health protocol without sacrificing worthwhile activities such as virtual mass, health and mental wellness lecture via zoom and the unveiling of the Operating Room Complex which is now formally named after Dr. Ronaldo Mateo who succumbed to Covid – 19 while active on duty, hence, it is now DR. RONALDO MATEO OPERATING ROOM COMPLEX. The unveiling was led by honorable Congressman Pidi Barzaga, Jr.

The hospital has been and continue to perform outstandingly attending to patients who are afflicted with the viral disease providing the optimum care to both its patients and health care workers/frontliners who are now undeniably modern heroes in the new normal,” Barzaga posted.

Politiko would love to hear your views on this...
Post Views: 11
Tags: Dasmarinas, mayor Jenny Barzaga