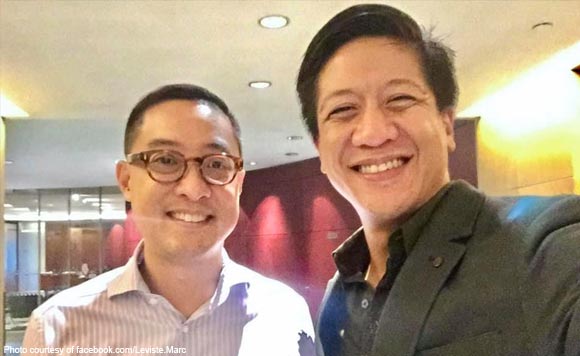 Batangas Vice Gov. Mark Leviste is proud of ABS-CBN President Carlo Katigbak, whose calm demeanor at the Senate hearing on the network’s franchise earned him a lot of fans.

Leviste, in a Facebook post, shared a photo of him with Katigabk and lauded the latter’s pedigree.

He said Katigbak hails from a long line of prominent families from Lipa, who were know for their aristocracy and wealth.

His grandfather Alberto Katigbak served as Ambassador to the Vatican and married a beauty queen, Criselda Olaguivel.

Their son, Nicolas, married Lourdes Lopez and had a son, Carlo.

He is one well-bred network executive!

“Man of the House. Carlo Katigbak, President of ABS-CBN, is a Batangueño who hails from a long line of prominent families in Lipa City known for its aristocracy, and was the wealthiest in the 1800s during the heydays of coffee which the Batangueños are known for.

His grandfather, Alberto Luz Katigbak, was born in Lipa, and was the Ambassador to the Vatican from 1970-1973.

Ambassador Katigbak was born to Francisco Katigbak and Conchita Luz, the latter being a half sister of Manuel Luz, who married Segunda Solis Katigbak, rumored to be Jose Rizal’s girlfriend in the 1880s.

Alfredo Luz Katigbak was a lawyer who worked at the law firm of a fellow Batangueño from Lipa, Senator Claro M. Recto, and afterwards, worked with another Batangueño from Tanauan, President Jose P. Laurel.

That is why yesterday’s Senate hearing was a reunion of sorts for Sen Ralph Recto and Mr. Katigbak.

Their son Nicolas Katigbak married a Lopez named Lourdes Lopez, and they are the parents of ABS CBN President Carlo Lopez Katigbak. 🔴🔵 #Kapamilya

• The Jewel of Lipa