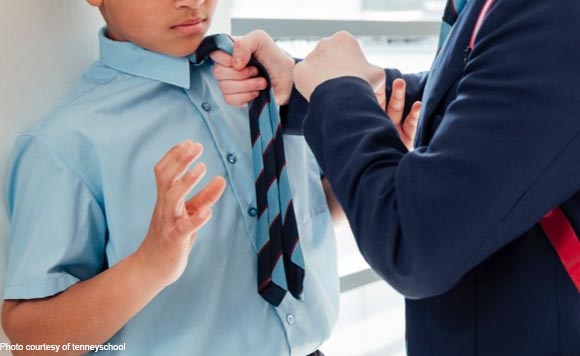 A Batangas school has found itself in the center of a bullying controversy with the initiation of an online petition asking it to take action on an alleged bullying incident that took place last December.

The petition in change.org, which has nearly 3,000 signatures as of Wednesday morning, requests the administration of Canossa Academy in Lipa City to take proper action on the incident.

According to the petition, the offender, during their class retreat, allegedly urinated on the head of the victim while they were in their quarters. The offender also supposedly peed in the victim’s mouthwash and personal belongings.

The petition noted that the offender was suspended for a week, but it said the actions merited expulsion from the school based on the students’ handbook.

It also said the offender had been called out in the past for similar behavior.

These kinds of actions should not be downplayed, it further said.

Will the signatures be enough to change the school administrators’ minds?

This petitionis a request for the administration of Canossa Academy in Lipa City, Batangas to execute proper action on a reported case of bullying involving their students which happened during a school-related function last December.

(Due to the sensitivity of the issue, the names of those involved have been withheld.)

The victim supposedly experienced physical aggression from the offender during their class retreat. The offender allegedly urinated on the head of the victim while the two individuals were in their quarters. He also supposedly urinated in the mouthwash used by the victim, and in his personal belongings. The school initially suspended the offender for a week after classes resumed in February.

For context, an infraction of this gravity is ground for expulsion under the rules of the institution’s High School Student Handbook. The act could qualify for a Level 6 violation, i.e. “Hazing in any form committed in connection with any student (any act/activity that deliberately inflicts harm to any student).” Violation of the said act, as per the Student Handbook, means “separation from the school.” Adding insult to injury, the offender has been warned previously for such behavior.

We, the signatories, call on the school to impose necessary actions stated in their Student Handbook/Code of Discipline on the individual(s) involved and to ensure the well-being of the victim(s). We also call on students, alumni, and other community members in ensuring that our beloved institution is a safe space for all individuals, especially those experiencing mental health difficulties. We long for our academic space to be free of oppression, discrimination, and injustice.

We denounce the attempts of the school administration to downplay the severity of the situation and threaten those who attempt to speak truth on the matter. Threatening to impose academic sanctions on students who call out the institution’s lack of proper action is surprisingly low for one that prides itself in academic integrity. That is ironically the opposite of being “responsible agents of social transformation,” one of the graduate attributes of the institution.

Stop defending offenders! Start upholding justice to victims of bullying and harrassment! Put an end to power-tripping! Ensure a safe academic space for all!