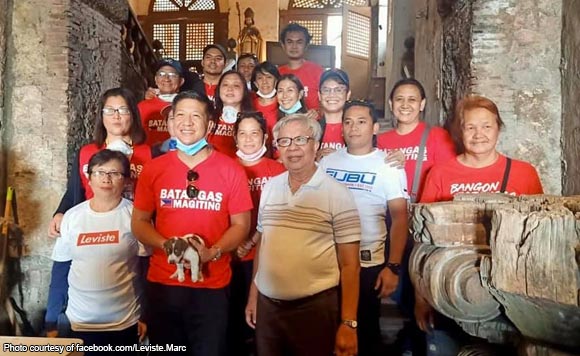 This is the kind of wal-wal weekend that won’t get anyone a scolding from their parents.

Batangas Vice Gov. Mark Leviste led the wal-wal, or the walis-walis para imis activity with his staff to clean up places affected by the Taal Volcano eruption.

In a Facebook post, Leviste said this was part of their weekly outreach activity to help places that experienced ash fall.

He said many areas in Batangas are still covered in mud and ash, including the heritage town of Taal.

So they proceeded to clean up the Basilica of St. Martin de Tours.

And it looks like the Vice Gov. got a bonus for his efforts, as he saw a puppy and was allowed to adopt it.

Now he just has to think of a name for it, he said.

Who knows what blessing he will bring home at his next wal-wal weekend?

“Wal-wal weekend with my OVG Family…as in walis-walis para imis 🧹🤠 At least once a week, my staff and I committed to do an outreach activity and leave the comforts of our office to help in cleaning different places affected by the #TaalVolcano eruption. Todate, several areas around the province are still covered by ash fall and mud. Recently, our team visited the heritage town of Taal to clean up the Basilica of St. Martin de Tours. That’s when I saw a puppy walking around the Church, and asked the Parish Priest if I could bring it home and take care of it. They happily agreed and even told me that (he) was born in an evacuation center sometime after the eruption, that’s why they initially named him “Bakwit” 🐶 We already have 3 dogs (2 aspins) at home. ❤️ Jc Leviste and I are figuring out what to name him permanently. Any suggestions? 😀 #BangonBatangas #BatangasMagiting,” Leviste posted.