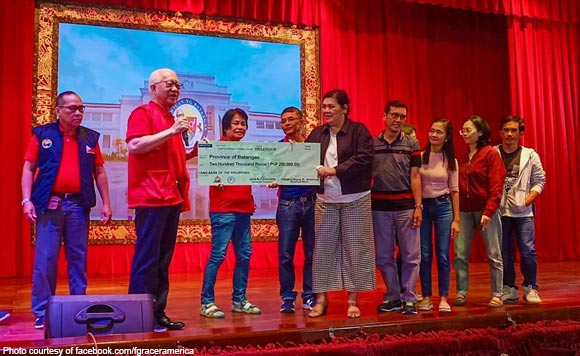 The Tala craze has produced something wonderful for the Taal Volcano eruption evacuees, and Infanta Mayor Filipina Grace America is happy to play her part.

In a Facebook post, America said the Infanta delegation traveled to Batangas City to turn over its calamity assistance.

It provided P200,000 from its local disaster risk reduction and management fund, and another P159,000 from the sweat and effort of those who joined in the Tala para sa Taal zumba and dance mob.

The Batangas officials were happy about the donation, and the Infanta residents were happy to help!

Infanta Delegation headed to Batangas City for the turn-over of Infanta LGU’s calamity assistance to the province relative to Taal Volcano’s eruption. The turn-over was conducted during the Flag Raising Ceremony at the Provincial Capitol Auditorium. The assistance/donation with a total of Php359, 000.00 (Php200, 000.00 from LDRRM Fund and Php159, 000.00 from the proceeds of “TALA para sa TAAL Zumba & Dance Mob, Barangay officials, LGU employees & other private individuals”) was accepted with heartfelt gratitude by Gov. Dodo Mandanas and the Sangguniang Panlalawigan headed by Vice Gov. Mark Leviste. Indeed, “Taal na Infantahin, Maka-Diyos kung kaya’t Matulungin!” America posted.