Batangas Vice Gov. Mark Leviste is thrilled at his daughter’s 15 minutes of fame 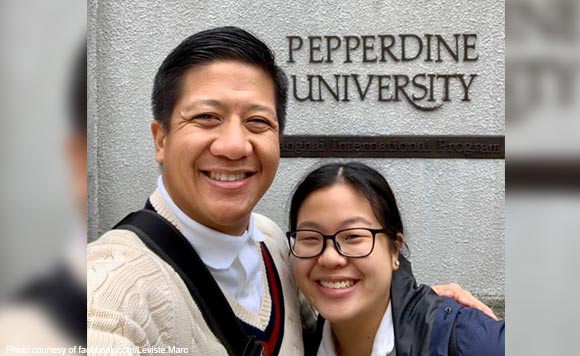 Batangas Vice Gov. Mark Leviste is no stranger to talking to media, but he felt a different kind of high when his daughter Arielle was interviewed by an international network.

In a Facebook post, Leviste said Arielle was interviewed by ABC7 News because she is a Pepperdine University student who spent a semester in its Shanghai campus and was affected by travel restrictions imposed because of the novel coronavirus.

He shared a link to the video.

According to him, Arielle was supposed to be in the Philippines for only a week but the university decided to suspend its spring semester in China.

Arielle was then told to return to Malibu, and her personal belongings in Shanghai would just be shipped to the US campus.

She is still in the Philippines but would return to the US soon.

The doting dad is thrilled that Arielle got a TV interview, but mostly he is just glad she is safe!

“I am seriously worried about the #CoronaVirus outbreak. Fortunately, we didn’t have to deal with it in Batangas during our evacuation efforts, and hopefully we don’t ever have to worry about it. But I can’t contain how proud I am when ABC7 News interviewed and featured Arielle on #EyewitnessNews. I’ve either been seen or heard in different local and national networks through the years, but never by an international network. 💯 Air is currently home with us since Chinese New Year. Pepperdine University in Shanghai scheduled what was supposed to be a week-long holiday only, but since the virus escalated, the school officials decided to suspend its spring semester in China. Most of her classmates traveled to other parts of Asia, and were all prohibited to go back. Instead, they are directed to return to Malibu. All their personal belongings in campus will just be shipped by the caretakers to Los Angeles. She’ll be with us for another week to help out in our relief operations at various evacuation centers around the province. Thank God my daughter and her group are safe from harm. 🙏 Swipe to check out Arielle’s 10-seconds of worldwide fame. 👏😷,” Leviste posted.

Politiko would love to hear your views on this...
Tags: Batangas, Mark Leviste, thrilled, Vice Gov.