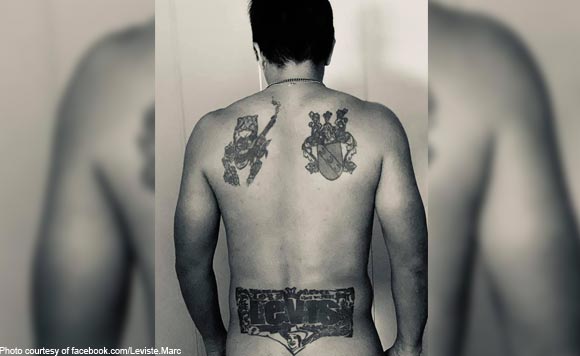 Batangas Vice Gov. Mark Leviste has been a long time fan of basketball legend Kobe Bryant, and he is not afraid to ink it permanently on his skin.

In a Facebook post, Leviste shared a photo of his tattoo that he got in 2012 to pay tribute to Kobe.

It was the crown on Kobe’s right arm that he had inked on his lower back.

According to him, he is a Laker for life and Kobe has always been his idol.

Now that the Black Mamba is gone, he is thinking of getting a tattoo of the Mamba Sports Academy in tribute to Kobe.

The “M” could also stand for his first name and the snake could represent his animal sign.

Kobe will live on his his heart and on his skin!

“Kobe blood runs through my veins 👑 Back in 2012, I decided to get a tat on my lower back to depict the most important subjects in my life. Among others is the crown on Kobe Bryant’s upper right arm. I am a #Laker4Life and the #BlackMamba has always been my idol. I asked my childhood buddy Ron Poe to ink me up, and I remember that it took us about 6 hours plus several breaks to finally get it done!

In 2013, I was privileged to be a part of G-Star RAW’s ad campaign featuring various personalities and tattoo art under the lens of Master Lodi Xander Angeles. Recently, Ron added a tattoo on himself that read: “The Mamba Mentality”. Indeed, the Legacy of Kobe lives on in our hearts and memories 💕 Now, I’m thinking of getting inked with the Mamba Sports Academy logo to immortalize the #MambaMentality, and at the same time representing my initial “M” (for Marc) and the snake (my animal sign – 1977) 🐍,

Most of my close friends call me “Levis” because of my last name (LEVISte) They continue to do so, but this time it’s because of my position (LeVICE) 🤠 #RIPkobe #MambaOut #MambaForever #LongLive #Mabuhay,” Leviste posted.