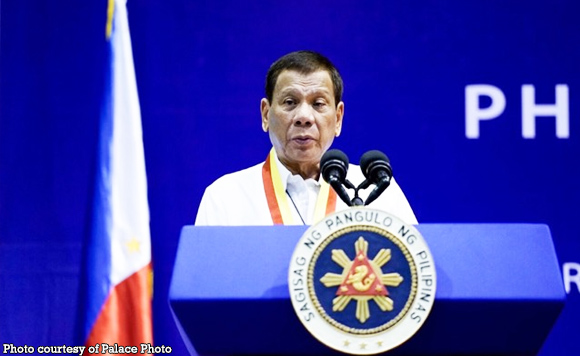 The President has decided to inspect the areas since he was unable to do that when he went to Batangas Sports Complex last Tuesday, Presidential Spokesperson Salvador Panelo said in a chance interview.

Three days after Taal Volcano spewed clouds of ash and steam last Sunday, Duterte led a situation briefing in Batangas and comforted those who fled their homes due to the volcano’s unrest.

Panelo, however, was not privy to the areas that will be visited by Duterte.

On Tuesday, the President said he was “very happy” with the government’s prompt response to mitigate the impact of the hazardous activity of Taal Volcano.

Thousands of residents within the 14-kilometer of the volcano, which is considered danger zone, have been ordered to immediately vacate their homes amid threat of an imminent hazardous explosive eruption.

Alert Level 4 is still raised over Taal Volcano and a state of calamity has been declared in Batangas and Cavite.

Philippine Institute of Volcanology and Seismology (Phivolcs) officer-in-charge (OIC) Renato Solidum Jr. earlier said evacuees could still not go back to their homes, even if Alert Level 4 is lowered to Alert Level 2 or 3.

Earlier Friday, Phivolcs said a hazardous explosive eruption is still being expected despite “steady steam emission and infrequent weak explosions” in the main crater of Taal Volcano for the past 24 hours.

The agency noted that the restive volcano’s activities have widened by a few centimeters the existing cracks on the ground in the towns of Lemery, Agoncillo, Talisay, and San Nicolas in Batangas.

A few steaming fissures have also been observed on the northern slopes of the Taal Volcano Island, while the shoreline around Taal Lake has been noticed to be receding.

Panelo said Duterte’s upcoming visit was meant to determine whether there is a need to come up with additional contingency measures for evacuees who were forced to flee homes.

He added that the President will once again lead the distribution of relief to victims of Taal Volcano eruption.