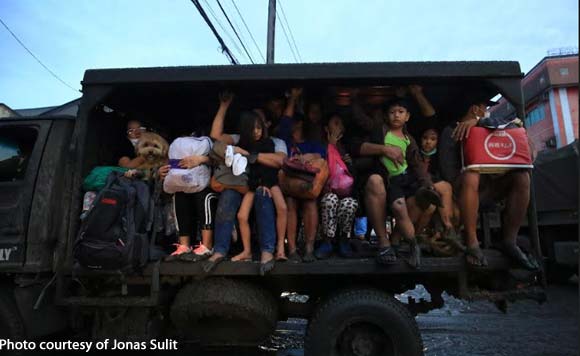 About 2,869 families from Talisay in Batangas — one of the towns near Taal Volcano — have been evacuated to safer grounds on Monday due to continuous volcanic activity.

A day after the volcano spewed heavy ashes and series of volcanic earthquakes, the residents have been advised to flee their homes for safety.

“Currently we are evacuating families left from yesterday (January 12), we still have an ongoing operation in coordination with the military rescue team, Philippine coast guard and with the local government units,” he said.

Some residents refused to evacuate despite the current condition of the volcano, but security forces urge families to stay out of the danger areas.

“We are also trying to assist the stranded individuals and families within the vicinity of the Taal Volcano as much as possible,” he added.

“As of our data at this moment, there have been 1,655 families evacuated but roughly an estimated 4, 000 (more or less) families are expected to be rescued against the hazardous effect of the Taal Volcano eruption,” he said.

Bert Caraan, a resident of Talisay, said he was not expecting the kind of volcanic activity in Taal, saying it was different from the previous eruptions.

“We were shocked when the volcano erupted at 4 p.m. on January 12, the heavy ashfall scattered in our house, we experienced countless series of earthquakes that made us all, my family scared,” he said.

Caraan’s family evacuated the night the volcano erupted but went back the next morning to check on their house and belongings.

“The sad part, some of our belongings were already covered with ashes,” he said.

Although communication lines are stable, there is no electricity and water.

Despite the advice to evacuate, Mike Ali, an entrepreneur from Tanauan town and owns a shoewear business, asked authorities to let him stay for a while.

“I think the weather still suits us,” he said, expressing hope that the situation would improve.

“We can’t leave our store, we need to attend to our business. If we see the volcano’s activity will continue to harm us that’s the time we will leave here, we’re just asking for few moments to move out here with our merchandise,” Ali added.

The Philippine Institute of Volcanology and Seismology (Phivolcs) raised Alert Level 4 for the Taal Volcano which means a “hazardous” eruption may occur “within hours to days.”

“We urge residents to evacuate for the meantime for your safety. We are encouraging the community to cooperate with the authorities for your own sake,” Baysa said. (PNA)