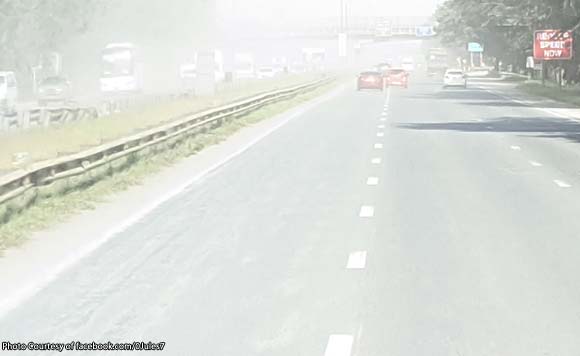 Ashes and pumice-like bits apparently spewing out of raging Taal Volcano in neighboring Batangas province sent residents of San Pedro City and its environs rushing into their homes for shelter late Sunday afternoon — at the height of family fun and reunions in malls, recreation parks, movies, and from work.

Renato Solidum of the Philippine Institute of Volcanology and Seismology (Phivolcs) said Taal Volcano’s magnetic intrusion that appeared to begin at about 2 p.m., was the likely driving force of the activity.

It could go more dangerous, he warned in a public announcement.

Residents of the three towns of San Nicolas, Talisay, and Balete in Batangas province, which are closest to the famous volcano that sits inside a bigger caldera, were ordered evacuated.

From a southbound passenger bus traversing the South Luzon Expressway (SLEx) can be seen whirlwinds of ashes as vehicles screeched to stops through the cities of Muntinlupa, and San Pedro, Biñan, and Cabuyao in Laguna province.

A bus conductor of Balibago Bus Lines kept dusting off ashes from his hair as soon as his passengers — who also complained that their sight was obstructed by the swirls — were off the vehicle and into the streets.

The faint smell of sulphur permeated the bus and an elderly whined that she was nauseous and having a headache.

“Isn’t this ash from the fires of Australia?” the bus driver quipped, feeling uncomfortable that he could not see clearly the white zebra lines for passenger crossing.

The pedestrian lanes were almost invisible, covered with half-centimeter-thick ashes and sharp bits of pumice.

Some passengers hied off to the Mercury Drug store at a bus stop to buy face masks.

It was the same situation in most open spaces elsewhere in the wide swath of towns and cities within the 800-km. range of Taal Volcano, a tourist attraction.

A driver retold his experience when Mt. Pinatubo dropped much thicker ashes and shards some two decades ago. He lost his whole jeepney then; he does not want it repeated.

It is not going to be a nice night. “We remember another Pinatubo-like morning (on Monday).” (PNA)