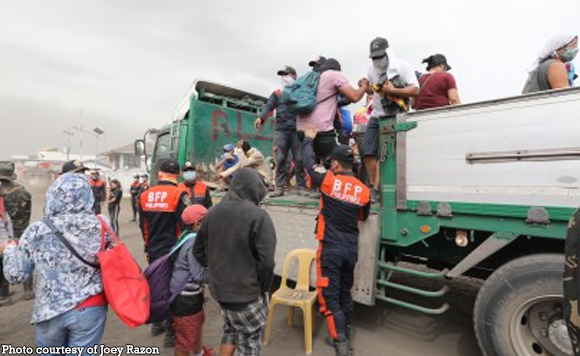 Jeric Sevilla Jr., Manila Water spokesman, on Monday said it is coordinating with its subsidiary, Laguna Water, on the distribution of free water to the evacuees.

Sevilla said the tankers will be deployed in Poblacion Balele West Covered Court, Poblacion Gloria, and Tanauan gym in Tanauan City, in PUP gymnasium in Sto. Tomas, all in Batangas province.

Water tankers will also be stationed at the Bolbok Provincial Sports Complex in Batangas City.

Sevilla said a request for water tankers have also been received from San Luis Municipal Hall and Taal Municipal Hall in Batangas as well as from Alfonso town in Cavite.

Other water tankers will be on stand-by for deployment to other evacuation sites as requested by local government units, he pointed out.

He said the refilling of these water tankers will be done by Laguna Water.

In addition, Sevilla said the Manila Water Foundation (MWF) will provide for free 2,000 units of 5-gallon bottles of potable water for the evacuees.

The distribution will be done by the Batangas Provincial Disaster Risk Reduction and Management Office (PDRRMO).

The sudden eruption of Taal Volcano on Sunday caught many by surprise, prompting thousands to flee their homes amidst spews of ashes that reach as far as Metro Manila and Pampanga in Central Luzon.

Taal Volcano is the country’s second most active volcano.

The Philippine Institute of Volcanology and Seismology (PHIVOLCS) has raised the status to Alert Level 4, an indication of a major eruption within hours to days.

Government agencies, including the Armed Forces of the Philippines (AFP) and the Philippine National Police (PNP) have been rendering assistance to the evacuees.

Politiko would love to hear your views on this...
Tags: Manila Water, Taal Volcano, water supply