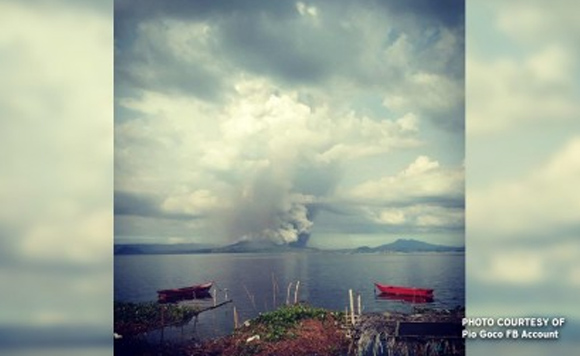 BIÑAN CITY, Laguna — The volume of ashfall from restive Taal Volcano has considerably lessened, some 20 hours since activities in the Batangas caldera began on Sunday morning, and residents of this city and environs have swept away debris from rooftops, vehicles, gardens and yards.

Road and human traffic are light as well, with all schools and most government offices in Calabarzon and Metro Manila areas closed to preclude accidents and inconvenience should hazardous materials from the ongoing eruption go worse as authorities predicted.

But the anxiety remains, even rising: When exactly will the Big Eruption, the likes of 1911 and 1965 which killed thousands, happen? It is an hour-to-hour wait, like waiting for Godot, with Alert Level 4 very much in place.

As Pio Goco, son of the late Raul Roco and Marietta Primicias, au bon vivant and Taal’s current self-appointed historian, recalls it: “In the midst of his lunchtime salad at a restaurant in Antipolo City two decades back, the greens momentarily felt crunchier; a while later he realized that Mt. Pinatubo’s ash fall has dripped onto his plate.

The Philippine Institute of Volcanology and Seismology (Phivolcs) retains its Alert Level 4, announcing early dawn on Monday that “lapilli,” which it described as large rock fragments of size 2 to 64 millimeters, have fallen in Tanauan and Talisay towns in Batangas, nearby resort city of Tagaytay in Cavite, and Sta. Rosa in Laguna.

It does not mention my town of San Pedro City, the southward entry point to southern Luzon from Metro Manila, but the inconvenience to city folks is the same and the anxiety is comparable.

With just the private sector operating, transportation movement is minimal in Biñan and Cabuyao cities, among the local government units (LGU) which have offered their public facilities such as school playgrounds and barangay centers as evacuation sites.

There are very few takers of the offer so far, since the bulk of those needing shelters and assistance are from such beleaguered Batangas towns of Laurel, Talisay and Taal itself.

More than a thousand families have moved to shelters in Batangas,according to disaster-management authorities.

The head of a farming family which lives practically at the cusp of Taal’s volcanic caldera, said in an interview that his household is safe at the evacuation center but feels terrible for the animals he had to leave behind, particularly his horse that brings tourists around the sight of Taal, known as the “volcano within a volcano.”

“They will die there,” he sighs tearfully.

About 20 kilometers from the volcano’s crater is the ancestral home of the Gocos, now managed by Pio, who relayed in his FB posts that from the San Nicolas Baywalk — where local and out-of-town tourists regularly converge to view Taal at its best at eye-level, he drove to the iconic landmark and “was able to get through Sunday evening” despite the tremors.

He clarifies there would be no coastal tsunamis, but a “volcanic one” could occur due to debris that could accumulate inside the crater, overflow into Taal Lake and displace its waters.

San Pedro resident Raquel Manalastas and her family happened to be in Tagaytay City on Sunday for her much-needed break as a medical doctor at the National Penitentiary in Muntinlupa City.

From her perch, she was busily taking selfies against very pretty, enormous cloud-like formations when suddenly there were “boom-boom-boom” explosions.

“We gotta outta here,” she said as she filed her kids into the car. She did not think it was Taal activating; once on the highway, however, she was glad they moved away in time.

Everyone was trying to leave the area and traffic was horrendous on the way home. Only to find out that ash fall has carpeted her lawn. Today, she expects asthmatic prisoner-inmates to line up in her clinic at the penitentiary for the possible after-effect of Sunday’s 12-hour long ash fall.