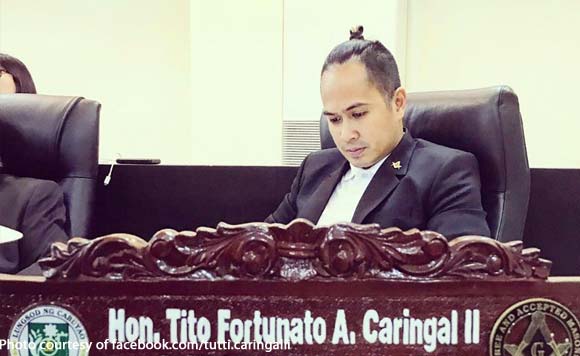 Cabuyao Councilor Tutti Caringal started a joke, but not everyone was laughing.

According to him, he just responded to a post on the Best of the Best Facebook group that asked for the most humane way of getting rid of stray cats in one’s backyard.

He posted that he bought an airgun just for that, but he did not mean that he intended to shoot them.

He said he just shoots the ground or the trash can near the cats to scare them away,

He wants to make it clear for the record that he has hurt no cat and does not intend to shoot them.

What he posted was meant as a joke, but he is nevertheless sorry for being offensive, especially to four-legged friends.

He may be no stray cat lover, but he assures people he’s no cat killer!

“Hi guys. Looks like the cat issue is getting out of hand and I’m sure all of you would like to hear my side. I will give you 2 explanations. A long detailed one and a short and simple one.

Here’s the long one:

May isang facebook group ang pangalan Best of the Best. Ang posts dun ay “Where is the best place to eat steak? What is the best way to fix my car?” etc. So may nag post “What is the best humane way to get rid of stray cats living in your backyard?” Mga pusang gala kumbaga. Nagcomment ako. Sabi ko “I BOUGHT AN AIRGUN JUST FOR THAT”. Wala akong binanggit na namamaril ako ng pusa mismo. In fact, I even explained na lupa binabaril ko or yung basurahan para magulat yung cat. That’s basically it. Diko na pinahaba, i deleted the post nalang.

Here’s the short and direct to the point explanation:

I DID NOT NOR HAVE I EVER NOR DO I INTEND TO SHOOT OR HURT ANY CAT OR ANIMAL.

Though crass and distasteful, they were meant to be JOKES. Those who know me would know and understand my humor. That being said, I apologize for being offensive, especially to our four-legged friends. 😽😽😽

Thank you and Happy New Year to all. Rakenrol 🤘,” Caringal posted.

Politiko would love to hear your views on this...
Spread the Love
Tags: apologizes, Cabuyao, Caringal apologizes, councilor, shooting cats