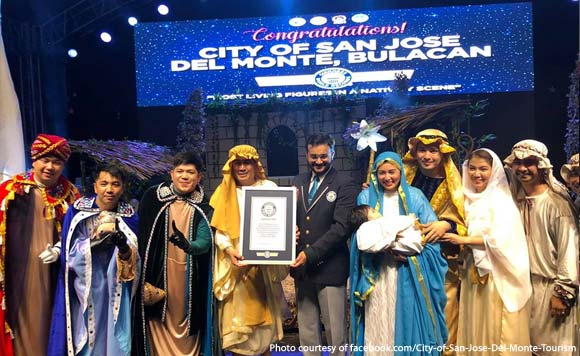 CITY OF SAN JOSE DEL MONTE, Bulacan — A new Guinness world record was established in this city on Friday for having the most number of living figures joining a Nativity scene.

It was the second Guinness world record for the City of San Jose del Monte, the first being the largest lantern parade on Sept. 19, 2017, with 14,173 lantern-bearing participants.

A total of 2,101 took part in the Nativity scene held at the Altraza Spine Road in Barangay Tungkong Mangga in the city at 6 p.m. on Friday.

This bested the 1,254 record set by the Calne Town Council and Bible Society in Calne, Wiltshire, United Kingdom on Dec. 3, 2016.

Swapnil Dangarikar, the official adjudicator of the Guinness Book of World Records, made the official announcement after the staging of the birth of Jesus Christ scene.

The city’s lone district Rep. Florida Robes expressed elation over the setting of the new world record, saying it is a testament to the unity and commitment of the people of San Jose del Monte to achieve a feat.

“It took us around six months to prepare for this event. The process was so tedious because the Guinness Book of World Records had strict requirements. But with the perseverance of our people, we made it and we are very happy,” Robes said.

Robes and her husband, incumbent Mayor Arthur Robes, also participated in the Nativity scene as shepherds who came to honor the birth of Jesus Christ.

Robes added that the Nativity scene was chosen because of the innate religiosity of the people of San Jose del Monte.

It was also in accordance with the recent Apostolic Letter of the Pope encouraging Catholics to display the Nativity scene in their homes and in other public places.

“We felt that we were being blessed because a few days ago, Pope Francis said in his apostolic letter that putting up a Nativity scene before Christmas is a reminder to stop and remember what Christmas is really about and to prepare one’s heart like a manger for the coming of Christ,” she said.

Mayor Robes said he hopes the event becomes a renewal for the people of San Jose del Monte to put the essence of Christmas in the forefront of the celebrations.

“We can achieve more if we are united and we hope that this Nativity scene reminds us of the true reason for the season as we face hand in hand life’s challenges. This is the best Christmas gift we have received as a city,” he said. (PNA)