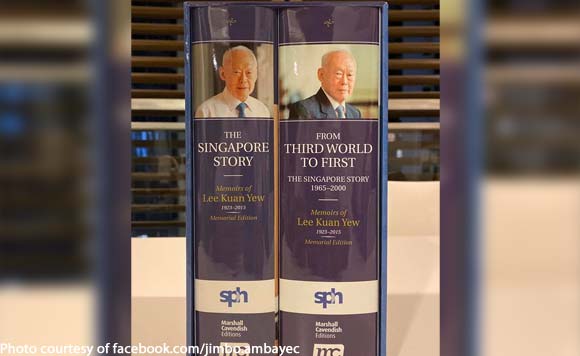 San Pedro Councilor Jimbo Ambayec is one of the many politikos who admire the man credited with turning Singapore into a first world country.

In a Facebook post, Ambayec shared a photo of the memoirs of the Singaporean leader and said he highly recommends the book.

According to him, each and every learner of politics and development should read it, as they would learn a lot.

He also shared a quote from Lee about his worry regarding the overconfidence of a generation that has only known stability, growth and prosperity.

“‘I was (also) troubled by the apparent over-confidence of a generation that has only known stability, growth and prosperity.’

This priceless collection, the memoirs of Singapore’s lifelong leader, is a highly recommended reference available to each and every learner of politics and development,” Ambayec posted.