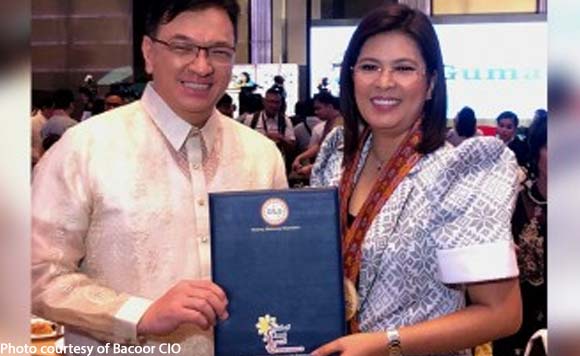 During the awarding ceremony at the Manila Hotel Tuesday, Mayor Lani Mercado-Revilla committed to continuously seek the highest level of governance for the people of Bacoor.

The city mayor said she is grateful to the Department of the Interior and Local Government’s (DILG) program “for providing the path towards excellence for me and my team”.

Through the SGLG program, the Bacoor city government was able to provide the best public service that our beloved constituents rightfully deserve, Revilla added.

Bacoor City is among the nine Cavite local government units which bagged the award, which also include the cities of Imus and Dasmariǹas, as well as the municipalities of Carmona, Magallanes, Maragondon, Mendez, Naic and Rosario.

The SGLG is one way for DILG to promote integrity and good performance among local government units. Through its progressive assessment system, local government reforms and development are institutionalized as LGUs are given distinction for their performance.

In Region 4-A (Calabarzon), a total of 33 local government units bagged the SGLG award.

The provincial awardees include Laguna, Quezon and Rizal, while the city government awardees, other than Cavite, include the cities of Biñan, San Pedro, Santa Rosa and Calamba of Laguna.

Other municipal government awardees are: Bauan and Taal in Batangas; Kalayaan, Paete, Pagsanjan, Pakil and Sta. Cruz in Laguna; Angono, Binangonan, Tanay and Taytay in Rizal; and Guinayangan, Gumaca, Mauban, Panukulan and Sampaloc in Quezon.

The SGLG award symbolizes the locality’s integrity and good performance through continuing governance reform and sustained local development, a progressive assessment system adopted by the DILG to give distinction to remarkable local government performance across several areas.

Among the core areas for assessment for component cities and first to third class municipalities include its financial administration, disaster preparedness, social protection, including peace and order; while the essential areas include business-friendliness and competitiveness, environmental management, and Tourism Promotion and Development, as well as Cultural Heritage Promotion and Conservation. (PNA)