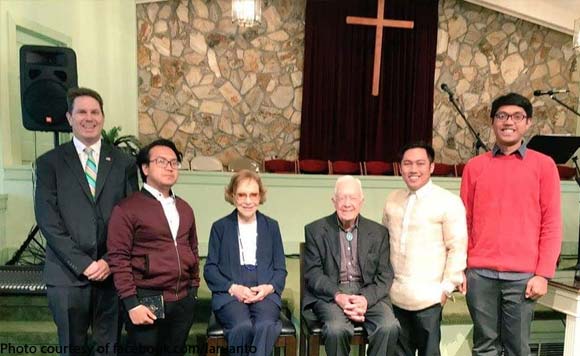 Infanta Vice Mayor LA Ruanto is proud and happy to have a living legend and ultimate hero, former US President Jimmy Carter.

He said Carter was one of the humblest people he met.

And yet Carter has many accomplishments. Aside from being the oldest living former US President at 95 years old, he is also a Nobel Peace Prize Awardee and a philanthropist.

This is why meeting Carter is one of Ruanto’s most cherished memories!

Happy Birthday to one of the most humble souls I’ve ever met in my life. Officially declared today as the oldest living former American President at 95 😍 Nobel Peace Prize Awardee, Philanthropist and the 39th President of the United States of America President Jimmy Carter

Will forever treasurer meeting and learning from this great man,” Ruanto posted.

Politiko would love to hear your views on this...
Tags: former US President, Infanta, Jimmy Carter, Vice Mayor LA Ruanto