Pacquiao is champion in more ways than one for Laguna politikos 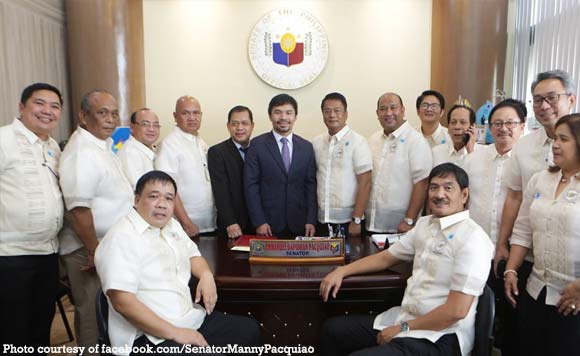 Sen. Manny Pacquiao made Laguna politikos happy when he met with them recently.

Laguna Board Member Angelica Jones Alarva, a friend of Pacquiao’s, shared photos of the meeting on Facebook.

In her post, Alarva thanked the Laguna mayors for the courtesy call to Pacquiao and also expressed her gratitude to the Senator’s office for hosting launch for them.

But what truly made the mayors’ day was Pacquiao’s promise to prioritize the request for projects of the Laguna officials, she said.

Looks like Laguna will be an even bigger Pacquiao fan now!

“Thank you to Mayor’s of Laguna headed by Lmp Pres. Mayor Egay Ramos for the courtesy call to office my boss Kumpare Sen. Manny Pacquiao 😀👍👊

Politiko would love to hear your views on this...
Tags: Angelica Jones Alarva, Laguna, Laguna Board Member, Sen. Manny Pacquiao