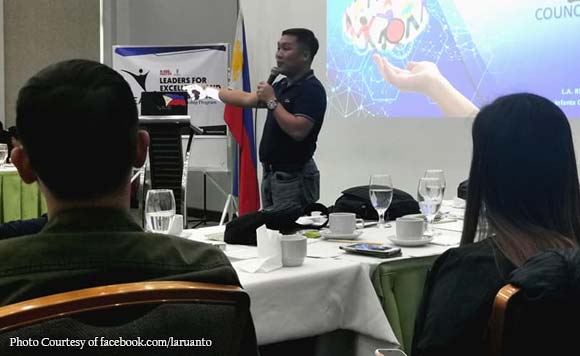 Infanta Vice Mayor LA Ruanto, it seems, is no stranger to earthshaking lectures.

For the second time, an earthquake interrupted a talk he was giving.

Ruanto, in a Facebook post, said he visited Quezon City to speak before mayors during the Leaders for Excellence And Public Service (LEAP) Fellowship program.

In the middle of his talk, he felt the ground move.

Thankfully, no one was hurt.

And it also had no adverse effect on his lecture, which was about how mayors can put up their own’ people’s council inspired by a similar project of the late Naga Mayor and DILG Sec. Jesse Robredo.

He may have been literally shaken, but the Vice Mayor remained on message!

Right after our FOI Seminar in Malacanang, I rushed to QC to give a lecture to MAYORS

from different parts of the country at the Leaders for Excellence And Public Service (LEAP) Fellowship program, when I felt the ground shaking. This was the second time I experienced being interrupted by an earthquake while giving a lecture to fellow public officials 😅

Though I wasn’t able to attend the Traslacion of our Lady of Penafrancia (Ina) today in Naga, i felt I’m there in spirit while giving a presentation to Mayors on how can they establish their own people’s council inspired by the case of People Empowerment in Naga and by Sec. Jesse Robredo,” Ruanto posted.