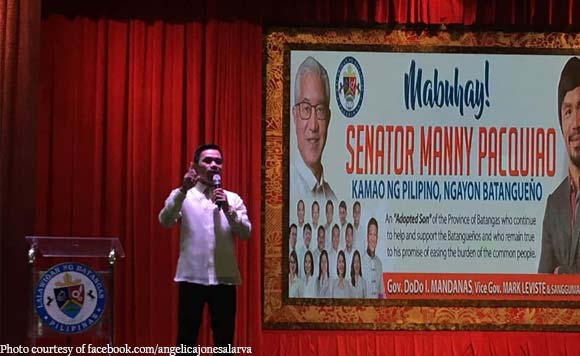 Senator and boxing superstar Manny Pacquiao may be a proud native of General Santos, but he can also call himself a Batangueno now.

In a Facebook post, Laguna Board Member Angelica Jones Alarva said the province of Batangas had adopted Pacquiao as its own son.

Alarva congratulated him for the distinction and thanked Batangas Gov. Dodo Mandanas and Vice Gov. Mark Leviste for the honored they conferred on the boxer-politiko.

Any province would be proud to have Pacquiao as a son!

“Congratulations to Boss Senator Manny Pacquiao ADOPTED SON OF THE PROVINCE OF BATANGAS?❤??

Thank you to Governor mandanas and