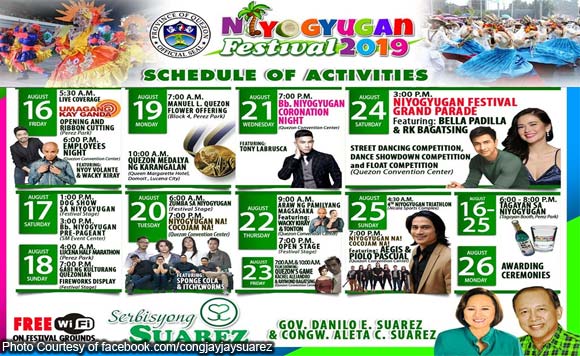 Residents of Quezon are in for another week of fun as the provincial government continues the celebration of the Niyogyugan Festival 2019.

On Monday, August 19, local officials will offer flowers at the monument of the late President Manuel Quezon at Perez Park. This will be followed by the awarding of the Quezon Medalya ng Karangalan.

A zumba session will take place at Perez Park on Tuesday morning, August 20. In the evening, there will be a free concert at the Quezon Convention Center featuring Spongecola and Itchyworms.

It will be an educational time for the public on Friday, August 23, as the provincial government holds a free screening of the historical film Quezon’s Game starring Raymond Bagatsing and Rachel Alejandro at the Quezon Convention Center at 7 a.m. and 10 a.m.

On Sunday, August 25, residents will get to meet Piolo Pascual as he guests in the Niyogyugan Na! Cocojam concert night that also features the OPM band Aegis.