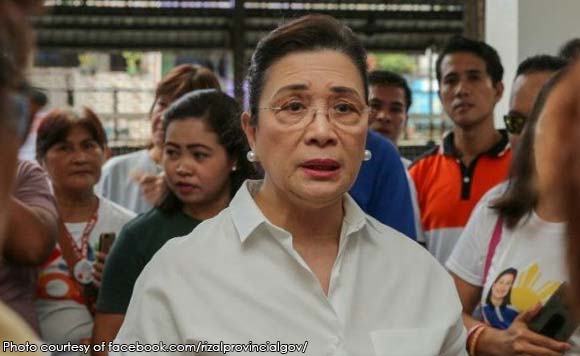 Local officials from the Province of Rizal are supportive over plans to get more additional representation in Congress.

Provincial Gov. Rebecca “Nini” Ynarez said she and all 14 mayors of the province were in favor of the proposed measure which sought to create additional congressional districts in Rizal to get more say in Congress.

“There is a consensus among Rizal officials that such a measure is long overdue given the growth of Rizal’s population,” said Ynares.

Under Nograles’ HB 336, Rizal province’s second district which is composed of the municipalities of Baras, Cardona, Jala-Jala, Morong, Pililla, Rodriguez (Montalban), San Mateo, Tanay and Teresa will be split into three seprate districts.

The towns of Cardona, Baras, Tanay, Morong, Jala Jala, Pililia, at Teresa will remain under the second legislative district while the municipalities of San Mateo and Rodriguez (Montalban) each will have separate congressional districts under Nograles’ proposed legislation.

Rizal Vice Gov. Reynaldo San Juan Jr. said all members of the Sangguniang Panlalawigan support the proposed additional representation for the people of the province since the current second district under Nograles have more than a million constituents or half of the entire population of the province.

“Rep. Nograles has to serve a little more than one million constituents as the second district alone has over half the entire population of Rizal. More representation in Congress means more legislators to serve the people of Rizal,” said San Juan.

Nograles said he was confident that his colleagues in the House will recognize the needs of his constituents and support this effort “to give the people of Rizal a greater voice in the Legislature.”