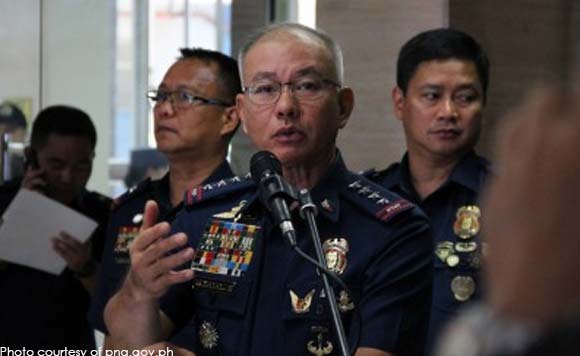 The police officers involved in the anti-drug operation in Rodriguez, Rizal that resulted in the death of a three-year-old girl will face criminal and administrative charges, Philippine National Police (PNP) chief, Gen. Oscar Albayalde said on Thursday.

He said two police officers will face homicide raps while 18 others were relieved from their posts including Col. Resty Damaso, Rodriguez chief of police.

The 20 policemen have been directed to report to the personnel and holding unit of the Rizal Provincial Police Office while investigation is ongoing.

“We cannot just accept those unfortunate things that happened and we cannot just let them get away with it. Even in other incidents, they should have practiced good judgment and observance of SOP (standard operation procedure) to avoid collateral damage,” Albayalde said in a press briefing.

He said he already ordered the top PNP officials to show the videos of the police operations that went awry during training for new recruits or even for police officers so they could develop “better discernment”.

“Definitely yes right after the incident, that will be included in the various training of both commission and non-commissioned officers. This is for them to learn lessons and avoid this kind of situation. I already ordered the consolidation of these videos,” he said.

Last June 29, Mica Ulpina, 3, was caught in a crossfire during police operations against suspected drug pushers in Rodriguez, Rizal.

Ulpina was among the four killed during the operations, along with Senior M/Sgt. Conrad Cabigao, the girl’s father Renato Ulpina alias Kato, and a suspected drug pusher Enrique Cawilig.

Meanwhile, the Calabarzon Police Regional Office (PRO 4-A) said the bullet that killed the girl, was in upward trajectory, hitting her nape and exited through her ears.

“Investigation revealed that the possibility of the bullets who hit Mica’s nape based on its upward trajectory was seen to be coming from the firearm of PSMS (Senior Master Sergeant) Cabigao while the downward trajectory of bullets that hit Mica’s right thumb and left foot was believed to be coming from an elevated position, which was later admitted by PCPL (Police Corporal) Mark Jherson Olaño as corroborated by Pat. (Patrolman) Christopher Escayde,” it said in a statement.

“This is supported by the testimonial evidence from his co-police officers that immediately upon knowledge of the fatal wounds sustained by their comrade PSMS Cabigao, PCpl Olaño went to the laundry area and indiscriminately fired his firearm against Kato (Renato Ulpina) who was then carrying his daughter (Mica). He also shot Kato on the shoulder while he was on the 3rd floor of the adjacent building, this was affirmed by Pat Escayde,” it added.

Brig. Gen. Edward Carranza, director of the Calabarzon regional police, said three other policemen will slapped with administrative cases for lapses in the operation.

Carranza said Olaño will be slapped with a homicide complaint as he was seen indiscriminately firing at Kato, leading to the theory that the bullet that hit the girl on the nape and eventually killed her may have come from his service firearm.

“This is supported by the testimonial evidence from his co-police officers that immediately upon knowledge of the fatal wounds sustained by their comrade Police Senior Master Sergeant Cabigao, Police Corporal Olaño went to the laundry area and indiscriminately fired his firearm against Kato who was then carrying his daughter Mica,” Carranza said.

The girl’s father was the subject of the buy-bust along with his alleged fellow drug pusher Enrique Cawilig. Both Kato and Cawilig were killed in the gun battle that stemmed when Kato allegedly shot Cabigao after sensing that he was a cop and not an ordinary drug user.

Cabigao and the three-year-old girl both died in the hospital.

Carranza said that the certainty that the bullet fired by Olaño that hit Myca will still be determined by the result of the Integrated Ballistics Identification System (IBIS) which is now being finalized by the PNP Crime Laboratory Office.

“This incident was very unfortunate, and we extend our deepest sympathy to the family of Mica Ulpina, but we assure the public that no stone will be left unturned until we get to the bottom of this,” Carranza said.

As a result of the investigation, Carranza designated Police Col. Renato Alba as the officer-in-charge of the Rizal Police Provincial Police Office effective Monday.

He replaced Col. Lou Evangelista after he was relieved from his post for his failure to exercise due diligence in supervising his men. (PNA)