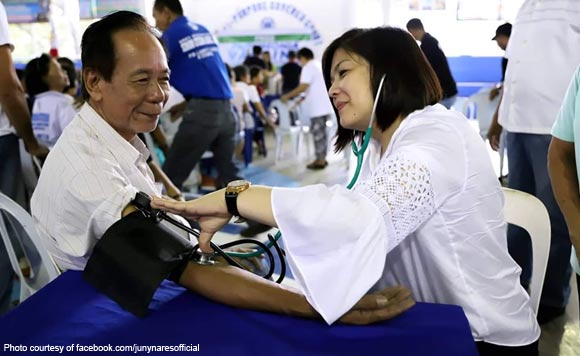 Antipolo Mayor Andeng Ynares and her husband, former Mayor Jun Ynares, had both planned to be doctors.

It was at medical school where the two of them met and fell in love, Jun recalled in a Facebook post.

But Andeng later decided to change careers to be with him instead, and it was only him who continued his studies, he said.

She may not have been a doctor, but Andeng was able to play medical professional for a day when she joined the city’s senior citizens who took part in the anti-pneumonia vaccination program.

Medicine’s loss was his and Antipolo’s gain!

“Andeng with our beloved seniors during the Anti-Pneumonia Vaccination program in Brgy. Bagong Nayon

Change career na daw sya. She does not want to be a doctor anymore. She wants to be with me na daw. Ehem! ???,” Jun posted.