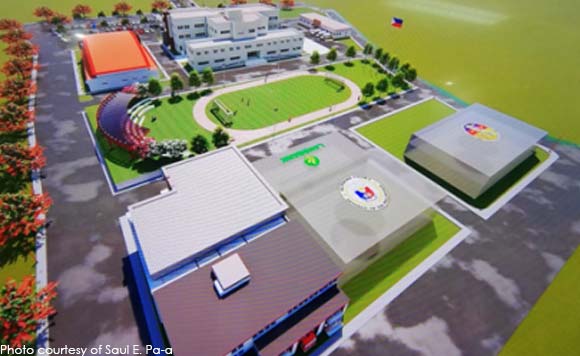 BALAYAN, Batangas — The local government is gearing up for the completion next year of its new town hall on the three-hectare government center complex.

“This (integrated government center complex) will provide more access and services of the government’s projects and programs as a one-stop-shop hub for constituents and the public,” reelected Mayor Emmanuel Salvador Fronda II said Wednesday.

Fronda said one of his priorities was to renovate and convert the more than a century-old municipal building into a municipal college, which will provide free tertiary education and will initially offer a criminality course for students interested to join the police and military service.

The plan for the government center complex was approved at the close of Fronda’s first term, which paved the way for the construction of the new municipal building, adjacent to the Department of Education (DepEd) school building and the multi-purpose covered court.

Other development infrastructure like the sports stadium, the Philippine National Police (PNP) local station, Bureau of Fire Protection (BFP), the Bureau of Jail Penology (BJMP) detention facilities, and the Hall of Justice Building for the courts and prosecutors’ offices would follow as soon as their bidding procedures and funding requirements are finalized.

A tourism landmark for a baywalk promenade facility expansion and the road linking it to the government center are also in the drawing board.

Fronda said he expects these structures and facilities inside the government complex will be completed within his second term.

“Interests of our local folks have grown due to the support of our soldiers and police because they see these improved services, especially the outreach programs that they are doing, and these have met our constituents’ rising expectations,” he added.

Apart from implementing the ease of doing business law signed by President Rodrigo Duterte, Fronda said there was a need to put in place the town’s comprehensive land use plan and the electronic business permits and licensing system with the help of the Department of Information and Communication Technology (DICT).

The mayor said the town would soon join the country’s alternative modern ports and berthing hubs other than Manila and the Batangas International Ports, as soon as port constructions are completed with the funding assistance from the Department of Transportation (DOTr).

“As the administrator, we project these developments would be completed before Mayor Fronda’s second term from 2019 to 2022,” Creag said. (PNA)