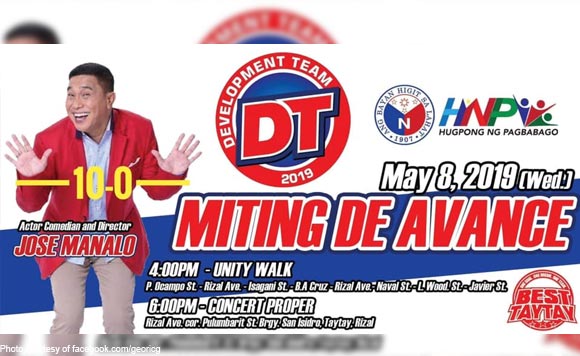 Taytay Mayor Joric Gacula’s rival Bonoy Gonzaga is toting some star power since his daughters are ABS-CBN hosts, but it doesn’t mean he doesn’t have stars of his own.

The miting de avance of Gacula’s team will feature comedian and TV host Jose Manalo, who is from the popular noon time show Eat Bulaga.

Gacula posted about the May 8 miting de avance on Facebook and invited his constituents to join the event.

It will begin with a unity walk before a concert.

Who says Gacula’s team doesn’t know how to entertain?

It looks like they’re planning to have a blast while delivering their campaign promises!