NPAs burn down equipment for Kaliwa Dam project in Quezon 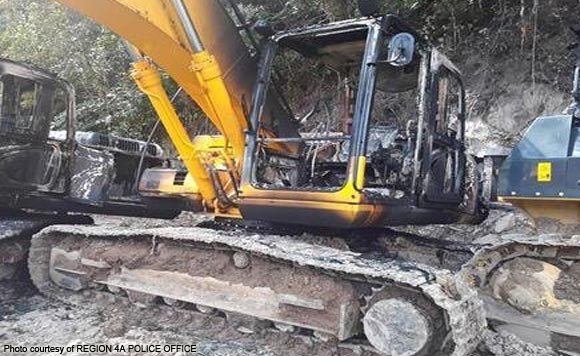 Carranza said around 15 members of the NPA torched three backhoes and a bulldozer being used for Kaliwa Dam project at Sitio Queborosa in Barangay Magsaysay in the eastern Infanta town on Friday.

“Upon knowledge of the incident, I immediately directed my men to double their efforts in solving the case and assure that the responsible persons will be put behind bars,” Carranza said.

He said the Region 4A Police Office (PRO4A) is now coordinating with our Armed Forces of the Philippines for the arrest of the perpetrators of the incident.

He also assured to exhaust all means to track down and arrest the suspects.

Infanta police chief Lowell Atienza said heavy equipment burned by the NPA, tagged by the US and European Union as terrorist group, are owned by the Northern Builders Corporation.