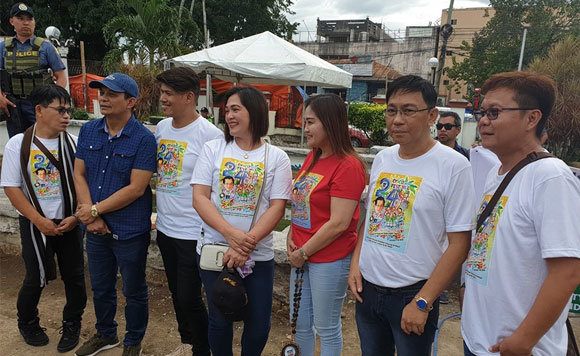 VIP guests help make events special, but they should only be given so much leeway.

San Pablo Councilor Eduardo Dizon is not happy with the event organizers after street dancing contest participants were made to wait for many hours when special guest came tardy to the party.

In a Facebook post, Dizon said he was against the idea of waiting for these VIP guests for hours before starting the competition.

The participants were made to assemble as early as 6 am, but the contest only began at 3 pm. San Pablo officials were also made to wait, having been told to assemble at 12 pm.

According to Dizon, the contest should have started at the proper time and it could have been stopped when the VIP guest arrived. The guest was not even a judge in the competition, he noted.

The participants must be exhausted, and he could not blame them if they, along with their teachers, coaches, supporters, and even the audience would be angry at the turn of events.

Dizon, though, made it clear that he did not take it against the guest even though the latter arrived “very late.” His anger is directed at those who advised everybody to wait for this guest.

He did not name this tardy guest, but photos he shared on Facebook featured a tarpaulin of senatorial aspirant Bong Go, President Duterte’s special assistant.

“I am a team player, but I am not solved to the idea of waiting for that “guest/VIP” for hours before starting the street dancing program/competition.
I understand that the participants in the Street Dancing were required to assemble as early as 6 a.m. to prepare (including the putting on of make-ups and fixing their costumes) only to start the competition at past 3 pm?
I hardly had my lunch as we were advised to come at 12 nn to prepare for the “salubong”, as a protocol being the govt officials (we had our lunch at 4 pm).
The competition should have started as announced even without that “guest”…afterall he is not even a judge….all invited judges were on stage at around 1 pm (surely because that was the “call time” given when they were invited)…unfortunately, they too needed to wait…my apologies to them!
The program could have been started and stopped anytime soon as the “guest” arrives, and this wouldn’t matter much…the audience will still be there for sure.
It is already dark…the judges will not have good visions of the performances now compared if it is still daytime…this will surely affect their judgments too.
The participants have waited for more than half a day…they must be very very exhausted already….i couldn’t blame if this causes anger/resentment/dismay among the participants themselves, their teachers and coaches, school administrators, the parents, supporters and even the audience themselves…including myself!???
I don’t take it against the “guest” (even if he comes very late)…I take it against those who advised that we should wait for the “guest” before starting the program…WRONG ADVICE indeed!,” Dizon posted.