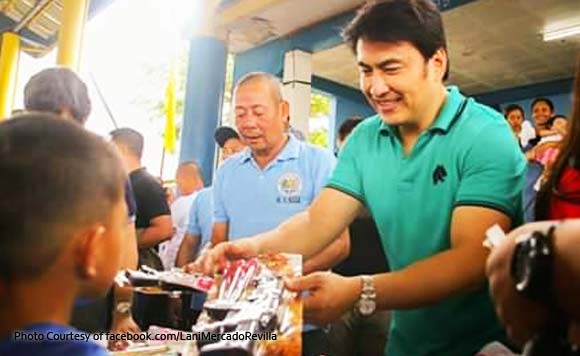 Former senator Ramon “Bong” Revilla Jr. isn’t wasting any time to court voters after getting out of jail earlier this month.

Bong on Friday joined his wife, Bacoor City Mayor Lani Mercado Revilla and son, Cavite Vice Governor Jolo Revilla, in traveling across barangays in the province to give gifts to residents.

Photos posted by Lani on her Facebook page showed them giving toys to kids in the barangays.

Bong was dressed simply in a green shirt, while Lani wore red. Aside from Jolo, two of the couple’s daughters joined them in the gift giving activity.

The former senator is running to reclaim his Senate seat in the 2019 elections.

He was recently cleared of plunder charges by the Sandiganbayan in connection with the pork barrel scam.