Binan Rep. Len Alonte inspires the creation of a mother and child figure 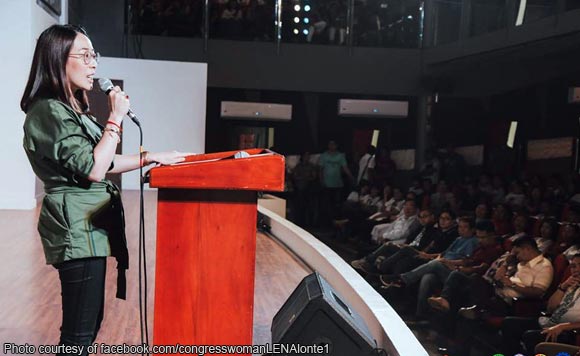 Binan Rep. Len Alonte is considered the mother of her province.

Because of this, Alonte inspired one of her constituents to come up with a mother and child figure made up of leftover bicycle and motor spare parts.

A post on her Facebook page shared that the Laguna lawmaker led city officials in the graduation of 502 Binan residents who completed the skills training program that she sponsored along with the Technical Education and Skills Development Authority.

In gratitude, a young mother who graduated from the program crafted the mother and child figure and likened it to Alonte.

Alonte looks after her children in Binan, who benefit from her programs, she said.

What a mother figure!

“Cong. Len Alonte-Naguiat, Biñan Lone District Representative, leads other guests and City Officials in the formal ceremony marking the graduation of 502 Biñan residents who successfully completed the different skills training program offered by the Alagang LEN in partnership with Technical Education and Skills Development Authority (TESDA). One of the graduates, a young mother who took up welding came up with a Mother & Child figure made of leftover bicycle and motor spare parts. She likened the image of the Mother & Child to Cong Len Alonte who looks after her “children,” her beloved Biñanenses who continue to benefit from her various plans and programs under Alagang LEN. Also present at the event held at the People’s Center on Monday, December 17, 2018 are City Mayor Atty. Arman Dimaguila Jr., City Vice Mayor Angelo Alonte, and key members of the City Council: Liza Lopez Cardeño, Dada Reyes, Jay Souza, Alvin Garcia, Jigcy Pecana, Alexis Desuasido, Rommel Dicdican, and Gener Romantique with fellow LABarkada Jedi Ochoa Alatiit and Em Arzola,” Alonte’s Facebook page posted.