Welcome to the jungle! GMA, Cavite Councilor Alfredo Abueg rocks out to GNR 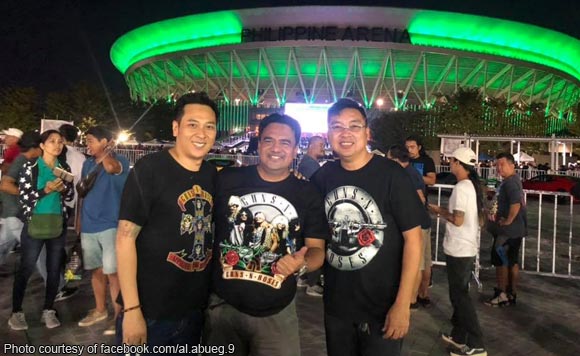 hese politikos sure know how to rock out and rock hard.

GMA, Cavite Councilor Alfredon Abueg and his relative, Palawan Rep. Frederick Abueg, were among the fans who came to see Guns ’n Roses during the band’s concert at the Philippine Arena.

They sported black Guns ’N Roses T-shirts as they jammed to the songs of their youth during the band’s Manila leg, which is part of its Not In This Lifetime world tour.

The councilor said vocalist Axl Rose was happy with the pinoy crowd, and shared videos of portions of the concert on Facebook.

We bet these politikos were among those who screamed their hearts out for the rock band!

Not in this Lifetime World Tour 2018 Manila leg…,” the Cavite councilor captioned the photos.